Once again, judging the submissions was a considerable task. Similarly to past occasions, the jury was co-lead by Zsombor Wagenhoffer, managing director of MÁSz, and Márta Birkás, professor of Szent István University. 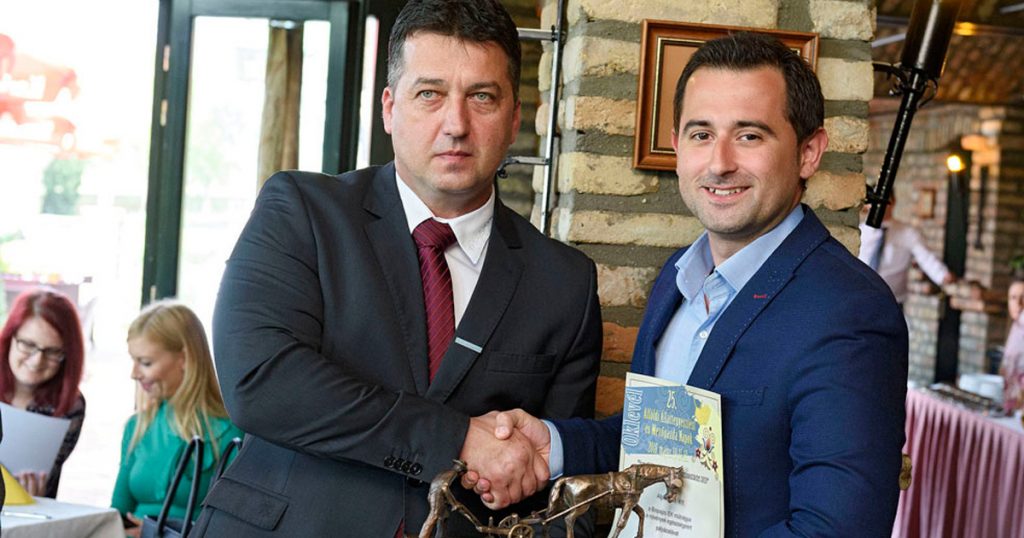 As in every year, they awarded recognition for several sub-categories and a Grand Prize in both livestock and crop cultivation categories. The organizers announced the winners and handed out the certificates during the April 18th ceremonial gathering on Hódmezővásárhely.

Only products with complex impact can meet the challenges of intensive crop production. By using innovative chemical solutions, we developed a formula, which contains an organic complex of nutrients in quantities that are unparalleled in the majority of other currently known products.

Our goal is to help farmers to substitute and reduce the use of synthetic pesticides and fertilizers, hence minimizing the risk of these getting into the food chain, as well as making production more economical.

Alpha-Vet put forward several submissions for the Product Awards, in both livestock and crop cultivation categories – all of which were recognized with outstanding ratings!

It is well known not only to veterinarians but also to livestock farmers that many internal parasitic species live in sheep and cattle. The several species of internal parasites of ruminants include unicellulars, trematodes, tapeworms, nematodes, and even some arthropods. They cause low production results – serious infections can even lead to death, and some parasites pose a risk to public health.
Therefore, according to current veterinary regulations, only healthy, parasite-free animals may be grazed on the pastures, or they must be treated with anthelmintics 14 days before grazing.

The recent decades saw the development of different antiparasitic agents and formulations with multiple points-of-attack, which inhibit the functioning of the parasites’ nervous system, thereby causing paralysis. The disadvantage of this point of attack, however, is that most of the agents act only against nematodes or only against flatworms (tapeworms, flukes). The nervous system of flatworms formed much earlier in evolution and it differs from that of nematodes in that they do not, for example, have the glutamate-dependent chloride ion channel that is inhibited by macrocyclic lactones (avermectin derivatives).

Due to the above issue, the discovery of Alphalben Suspension’s active ingredient, albendazole, was very fortunate. It acts by binding to the microtubules of parasite cells and inhibits their rebuilding. The microtubule system is found in the cells of all parasites (even plants and fungi) and is essential for vital functions such as cell division, food absorption, and secretory processes.
Based on data from scientific literature, albendazole has an ovicidal effect against tapeworm eggs and also kills adult rumen fleas in addition to liver fleas.

In the last 15-20 years, new scientific discoveries effectively debunked this approach, which can now be considered outdated. It does not take into account changes that came to as results of animal and plant breeding progress in the past 20 years. Laying hens reach their peak production sooner and can maintain higher rates of production for a longer time, so the length of the fattening of a modern broiler chicken or turkey cannot even be compared to the fattening period ten years ago. The farm animals in production today could be considered Olympic champions!

In other words, instead of the conventional use of vitamin preparations as treatments, they must now be incorporated into the daily technology in modern poultry farming and breeding.

Poultry owners and breeders have long recognized this. The spread of modern hybrid breeds, the supplementation of Phylaxia vitamin preparations developed for intensive production, and their integration into technologies have gone hand in hand for decades.
The PHYLAXIA vitamins are now produced by Alpha-Vet, after investing hundreds of millions into technological advancements

The SMARTBOW electronic ear tag system is a unique animal monitoring system.
Thanks to the electronic ear tag, all micro-muscle movements of the animals are recorded, which means more than 80,000 signals per day for tagged animals.
The software, developed with the help of veterinarians and livestock professionals, uses the signals transmitted over a wireless Internet connection to write unique algorithms for the tagged animals – thus the self-learning animal monitoring software becomes the “eye of the farmer.”

This year, Alpha-Vet Ltd. submitted an entry together with AnimalSoft Ltd., presenting the AnimalControl software.

Everyone wants to know the monetary results of their economic activity, as the goal of a business is to maximize profits. However, we never have enough information about this at any given moment. Our decisions are primarily influenced by when and to what extent our investments pay off. The greatest asset of AnimalControl is that whoever uses this program will know the exact monetary outcome of each installation and the efficiency of their performance. You will know which barn to renovate, which supplier or buyer to prefer, or just to replace.

Using the program can save a lot of labor, but more importantly, it accelerates decision-making. What you have so far only speculated will now be supported by facts. You don’t have to call other colleagues anymore to find out something about your livestock farm, and you don’t have to wait for any information. Just sit in front of a device – wherever in the world – and you can know, you can see whatever you’re wondering about.

All this becomes visible in the increase in profits, even after a few months of use.

• It is the only precision system that can handle breeding, rearing and fattening data in one software, in a way that is unique in the world
• The only program that continuously calculates the expenditure
• The only platform in which you can see the result immediately at the end of a given rotation, not only at the end of the business year
• The only interface where both professional and financial values can be calculated in a few seconds and you can choose the most effective options
• The only solution that can provide the user with all the business data at any time on a permanent interface developed for this specific purpose within a few seconds
• The system develops its own structure of rules and responsibilities in which employees feel at ease
• Eliminates time spent on providing data that steals long hours from meaningful work
• Improves financial results
• Enables the creation of an ideal technological and social environment
• Efficient cost management