An environmentally friendly and economical solution for maize cultivation 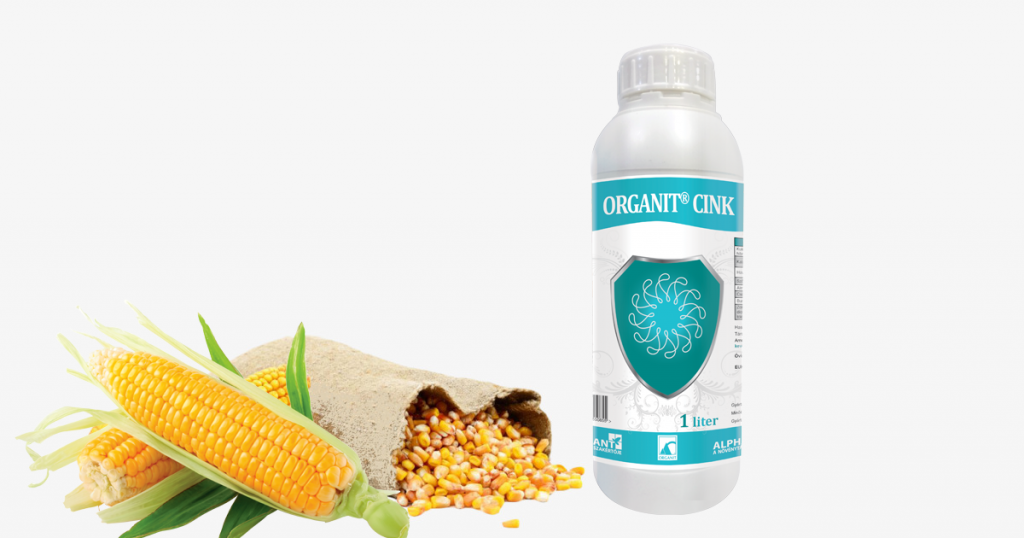 Yield fluctuation is significant in maize production. After the 1990s, the degree of volatility increased from 10-20% to 50-60%, which is only partly attributable to the more extreme weather conditions.

Plant nutrition today means more than just delivering as many nutrients as the plant may utilize. The farmer aims to produce profitably, but the general interest of society dictates to do so in an environmentally friendly way. The Organit ® Zinc chelate from the Alphaplant product line offers an economical solution for this.
Maize is primarily a nitrogen- and potassium-demanding plant.

Nitrogen uptake becomes intense from the 6-7-leave stage and begins to slow only at the beginning of flowering, but nitrogen uptake and incorporation are also significant during grain filling. Nitrogen increases not only the vegetative mass but also the grain yield. 61% of the total nitrogen uptake by maize is transported to the grain crop (Berzsenyi, 2013).

Potassium uptake also increases from the 6-leaf stage, but slows down at the beginning of flowering and then decreases to a minimum. It plays a significant role in better rooting, heat, cold, and drought tolerance.

There is little talk of phosphorus in maize production, although its lack in the early stages of development can be critical. The plant may display anthocyanin symptoms, and its development slows down. Phosphorus uptake becomes significant from the 4-6-leaf stage and is maintained even through the period of grain filling. 70% of the phosphorus absorbed during vegetation is transported to the grain crop, which confirms its importance in crop production (Berzsenyi, 2013).

Of the microelements, maize is sensitive to the lack of zinc. Latent deficiency can lead to up to 10% of yield loss. The plant lags in development, nitrogen utilization deteriorates, and white streaks appear on the leaves. Especially on carbonate soils, where the lime level exceeds 4 g/kg of soil, the uptake of potassium, magnesium, manganese, boron, and zinc is also inhibited. The latter can also become a yield-limiting factor (Berzsenyi, 2013). Measuring a zinc content of less than 1 ppm during soil tests clearly indicates the absence of the element, and it is worth taking care of its replenishment.

These days, our plants cannot always get enough microelements from the soil to achieve high yields, so foliar fertilization has become an inevitable technological step. However, the amount absorbed has limitations, so micronutrients and, in critical cases, some macronutrients, such as magnesium or sulfur, can be supplemented through the foliage. Timing is decisive, as fast and efficient intervention can prevent yield loss or quality deterioration, and we can even achieve yield growth and quality improvement under favorable conditions.

Due to the high zinc demand of maize, zinc deficiencies can be identified in many agricultural areas. Due to the intensive cultivation, the zinc stocks in the well-endowed maize-growing areas of Hungary have significantly depleted. To avoid a shortage of zinc and other trace elements, apply foliar fertilizers in a 6-8-leaf stage, combining application even with a later, post-emergence weed control. If the foliar fertilizer is applied in a separate pass, with a normal field sprayer, choosing the latest possible time when the treatment can be carried out without damaging the plant is advisable, because by that time there is already enough foliage to effectively apply the fertilizer. Ear emergence is the last time when taking care of nutrient replenishment is necessary.